Beef brisket is one of the finest cut qualities of meat for any cook to enjoy the process of cooking. It can be a challenge due to the size and toughness of the muscle tissue of the cow’s lower pectoral muscles. This might leave you wondering if you can cook a brisket from frozen?

Yes, it is possible to cook a frozen brisket without thawing out. It has issues that make it harder to prep and longer to cook. It almost eliminates every avenue for how to cook it. The best way to cook it is in the oven because other methods will not kill the bacteria fast enough.

It is still better to thaw the beef brisket, but we understand you may be pressed for time. Before you start cooking a frozen brisket, there are essential things you need to know, and we will cover all of the scoops in this article. 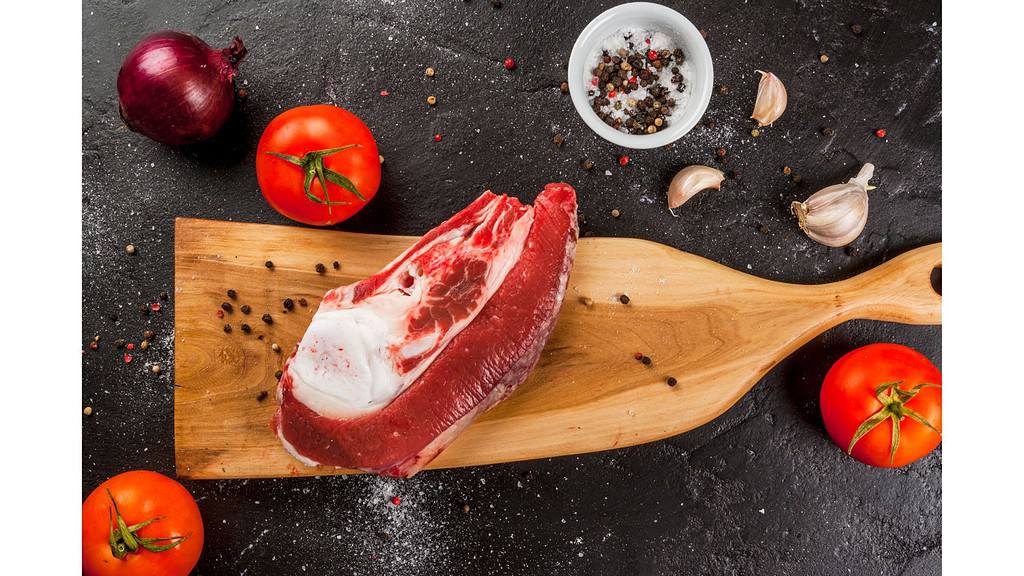 It will take a slight thawing out if you want to prep a frozen brisket that is not already preseasoned or marinaded. The outside will be frozen so that nothing will stick to it with the frostiness all around it.

Only the outside needs to be thawed to prep it for cooking. If it is preseasoned or marinaded, all you have to do is pop it in the preheated oven for low and slow cooking.

Most people like simplicity, like mustard (optional), salt, and pepper on the brisket because they appreciate the beef flavor over the spices. Others like to add other seasonings, which are perfectly fine; it’s your brisket to choose.

Some people wonder about adding meat tenderizers to the brisket. It is an option but is not necessary. The low and slow-heat cooking will take care of that. The magic is in the fat that melts into the meat as it is cooking.

Related:  Can You Use Milk Instead of Water in Your Brownie Mix?

Blasting with high heat will not make it take less time to cook. It does not allow the fat inside the brisket to do what it is meant to do. In fact, it will ruin the brisket, burn the outside, and leave the inside too tough to chew. 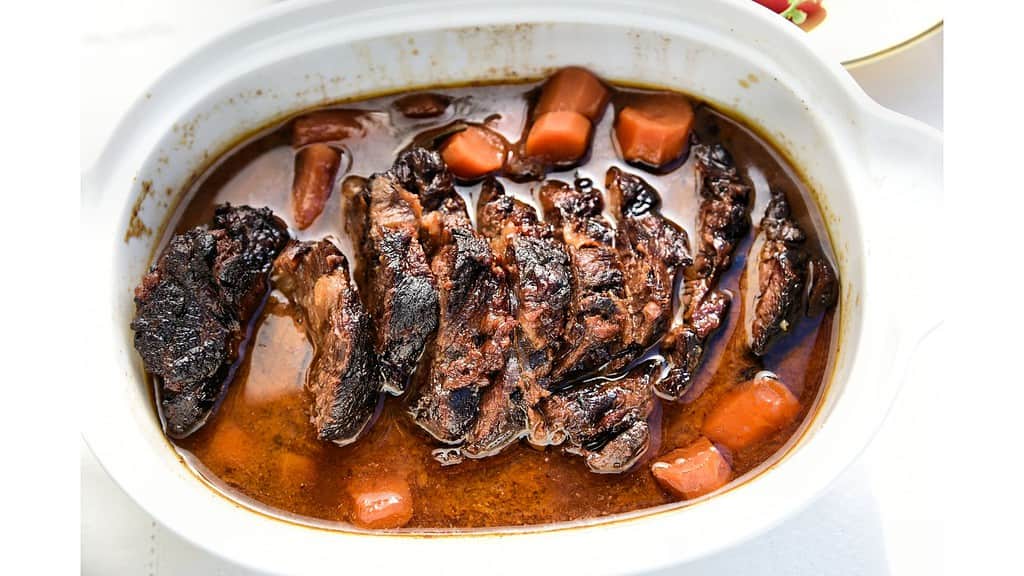 As mentioned, high heat will not work on brisket, and the effects will be even worse on a frozen brisket. If the brisket is frozen, the only option is to cook it in the oven. Slow cookers, grills, and smokers cannot guarantee the sustainable heat an oven will have.

Inside a slow cooker, the heat will not kill the bacteria in a frozen brisket fast enough. Grills and smokers are perfect for thawed-out brisket but can burn the outside before cooking the inside.

Even though the temperature is correct, it can be challenging to control, and that kind of chance should not be taken with a fine cut of meat like brisket.

An oven has more control over the heat to remain at a low and slow temperature. With a thawed-out brisket, it takes one hour per pound. We call for 300 degrees Fahrenheit to perform at its best.

If the brisket is frozen, it will take another hour or two to get the inside cooked to perfection. It will be challenging to figure out, so it is best to thaw out the brisket first. The thing about brisket is the longer it cooks at a low and slow pace, the better the outcome for fork-tender meat.

Thawing Out the Brisket 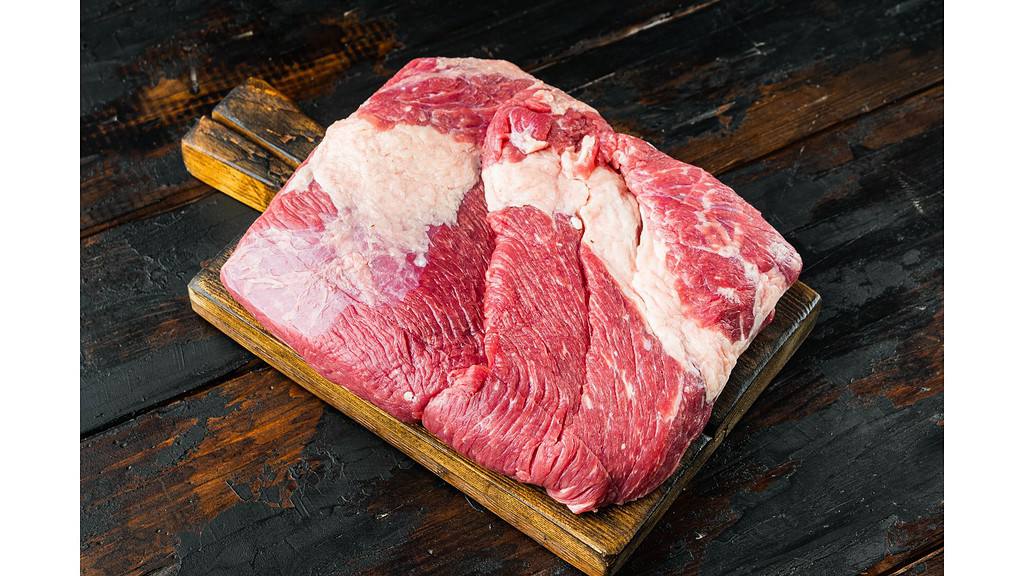 We know it takes a long time to thaw out a massive piece of meat like a brisket, especially one that is four to five pounds on up. The safest way to thaw out brisket is to take it out of the freezer three to four days before you are ready to cook it and put it in the fridge.

Related:  Should I Season Brisket Overnight?

Other methods include a water bath and defrosting it in the sink with cool water. This process will take a day to thaw it out thoroughly. Ensure the meat stays in the package and unopened so that the water does not come in contact with the meat.

Then there is letting the favorite household appliance do the trick. You can put the frozen brisket in the microwave and use defrost to thaw the meat. Sometimes the defrost may not work so well, and that is fine.

Try turning the power down 50 percent and heating the meat up for five minutes on each side of the brisket. 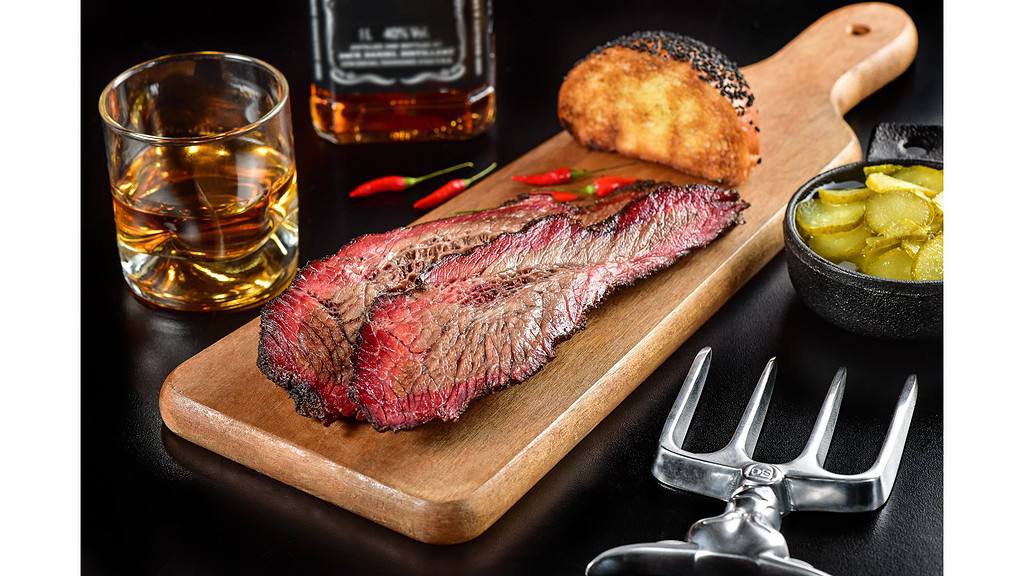 No matter what method you choose, it would help if you made sure the middle is thawed out. Since the meat is flatter than a roast, try picking it up on one side of the beef and seeing if the brisket falls easily on the opposite side.

If it stays flat and doesn’t flop downward, or you hear a crunching noise in the middle, the inside is not thawed out enough and still has ice or frost in the middle.

Try defrosting it in the microwave again for one to two minutes at a time until there is no trace of ice or frostiness on the inside.

Any trace of ice or frostiness, the brisket will not cook well outside of using an oven. The outside will burn, and the inside will be tough to eat. Remember, cooking a frozen brisket on the grill, smoker, or slow cooker is not recommended.

Related:  Can Brats (Bratwurst) Be Pink in the Middle?

Cooking the Brisket in a Slow Cooker, Smoker, or Grill

They don’t call it a slow cooker for anything! It is slow and can cook meat for up to 12 hours. Here is why we do not recommend cooking a frozen brisket in a slow cooker. The brisket must reach a temperature of 140 degrees Fahrenheit within a specific time, or the bacteria will set in the meat and contaminate it.

The temperature is not high enough or fast enough to get the job done with a frozen brisket. It is not worth taking a risk when it comes to your health.

Regarding grills and smokers, it is difficult to maintain the temperature sometimes. Any air from the outside that gets inside the grill can cause flare-ups, raising the temperature, and indirect grilling cannot get the frozen inside cooked fast enough to kill the bacteria. 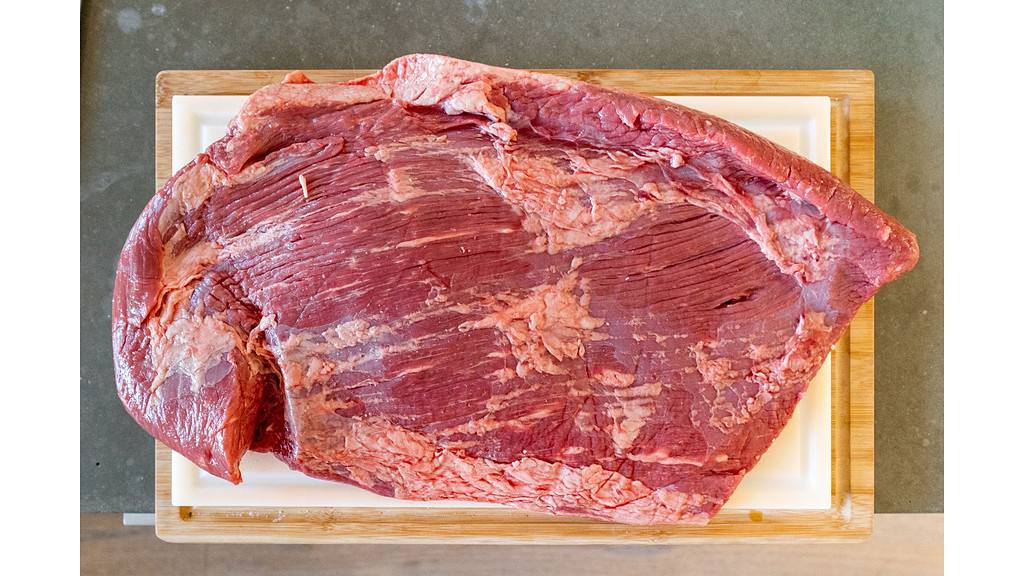 The same applies to a smoker. Both will take too long, closing the window of opportunity, so it is best to thaw the brisket out before cooking on a grill or smoker.

The meat quality will also fail because the meat will dry out quicker if cooked frozen.

How long does it take to thaw a brisket?

It is best to thaw a brisket two to three days before the cooking day. It can take a few hours at room temperature, but this is not recommended due to exposure to bacterial contamination.

The microwave or water bath could take up to an hour, depending on how many pounds the brisket is.

What is the perfect internal temperature for a brisket?

We recommend cooking it at an internal temperature of 195 to 200 degrees Fahrenheit. Leave it to sit for up to 20 minutes after removing it from the oven before cutting it.