If your chicken broth is spoiled, you’ll probably realize it before eating it. The sight and smell should alert you that it’s gone bad. So, what happens if you eat bad chicken broth?

You’ll probably experience stomach cramping, vomiting, and diarrhea if you eat bad chicken broth. The symptoms may be severe enough to require emergency care in rare cases, but usually, the stomach distress passes within a few hours to two days.

Fortunately, it’s usually easy to recognize bad chicken broth and avoid eating it. And remember that “when in doubt, throw it out” protects you from food poisoning when you’re unsure if something has gone off.

Let’s look at how to store chicken broth and know if it’s spoiled.

How To Know if Chicken Broth Has Gone Bad?

Chicken broth is a pale yellow color with a savory scent of chicken and seasonings used to create it. A strong, sour, or rancid odor indicates spoiled broth.

Visible signs of spoilage include mold, which can be bluish-green or white, cloudiness, color changes, or visible particles suspended in the broth. Never remove mold from the surface of a container of broth and assume the rest is safe. If mold is growing, the broth has spoiled.

If the broth has a sharp, sour, sweet, or unpleasant taste, spit it out and discard it. Consider any unusual taste a sign that something’s wrong. If you’re not sure, throw it out. 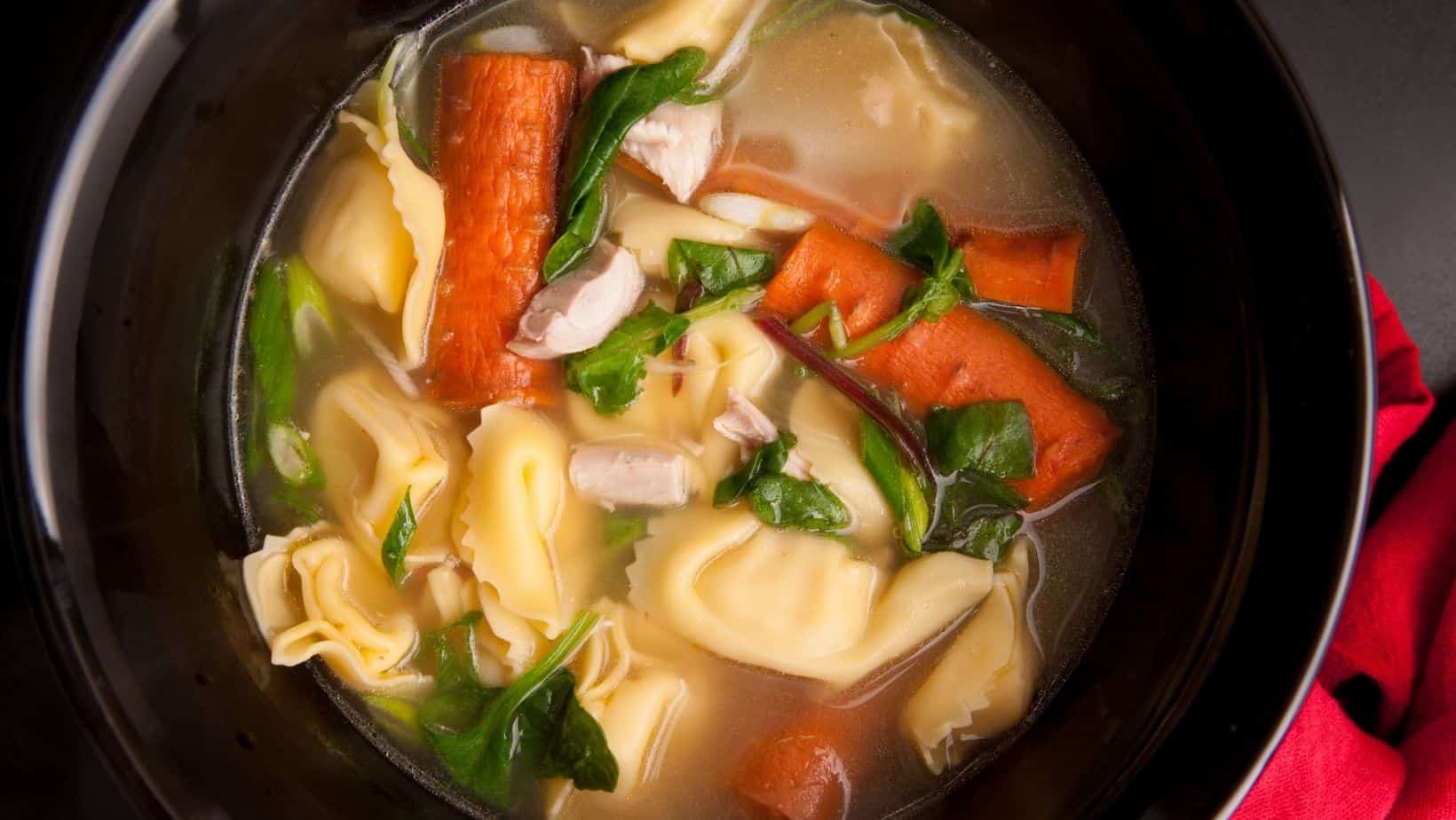 Chicken broth will eventually spoil even in an unopened container. A bulging can or box is a sign that the broth is bad. Bacteria growth caused built-up pressure inside the container, and you should throw it out.

The broth has spoiled if you open a container and pressure releases with fizzling or spurting.

Canned broth with deep dents could have allowed air and bacteria inside, allowing botulism to grow. Botulism poisoning is potentially fatal, so you shouldn’t use rusted or deeply dented cans, especially with dents on any seams.

Chicken broth is the water used to boil chicken that can go bad like cooked chicken can. So, yes, chicken broth will spoil after you open it. It usually won’t go bad for at least four or five days if you store it in the refrigerator.

Related:  SunnyD: What You Need To Know Before You Buy

Does Chicken Broth Go Bad in the Fridge?

Yes, it will go bad in the fridge. Chicken broth doesn’t have an unlimited shelf life even in the refrigerator. Refrigeration slows down the processes that spoil food, but they’ll still spoil given enough time.

How Long Does Chicken Broth Last in the Fridge?

Open chicken broth will last three to five days in the fridge if it’s covered and kept continually cold. When you open broth, store the leftovers in as small a container as possible to limit the broth’s exposure to air.

Use a clean container with a tight-fitting lid or a container covered tightly in plastic wrap. Don’t store broth in the can. If you use a boxed broth, you can refrigerate the leftovers in the original container, but a smaller one is better.

If you refrigerate homemade chicken broth and a thick cap of congealed fat forms on top, the broth can stay good for eight to ten days. The hardened fat seals the surface and keeps air out.

When this happens, it will spoil more slowly than broth without a layer of fat. 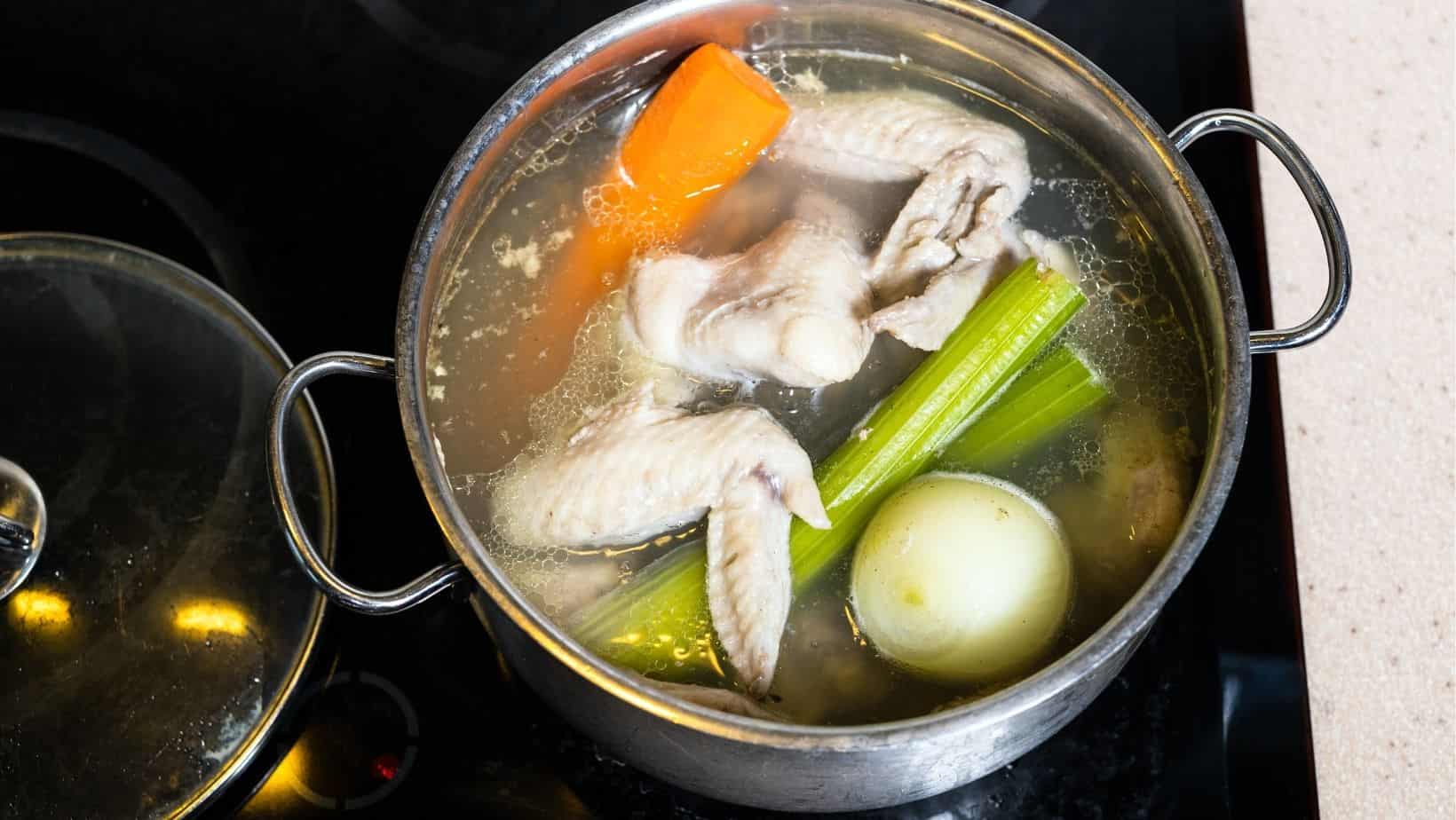 Can I Freeze Chicken Broth?

Yes, chicken broth freezes well. If you don’t plan to use all the broth within a few days, package it carefully and freeze it to preserve it longer.

Use the smallest container you can with a tight seal. A freezer-safe bag with as much air removed as possible also works. If you plan to use small amounts of broth at a time, you can freeze it in ice cube trays and store the broth cubes in a container or baggie.

By freezing broth in the amounts you’ll need, whether in an ice cube tray or cup measurements, you’ll save time later and avoid thawing more broth than you need.

Will Chicken Broth Go Bad in the Freezer?

Bacteria that cause food poisoning can’t grow at freezer temperatures, so chicken broth won’t go bad in a freezer. As long as the freezer stays at the proper temperature of 0 degrees Fahrenheit, it will remain safe to eat no matter how long it’s frozen.

If the chicken broth went bad or contained some food poisoning bacteria before it was frozen, it would still be unsafe to eat after freezing. But if it was good when frozen and the freezer hasn’t warmed up while it was inside, it will stay good.

Related:  Can You Eat Chicken Bones? (Are There Benefits?)

What Happens if You Eat Bad Chicken Broth?

If you eat bad chicken broth, you’re ingesting bacteria that grew because of the broth’s age, temperature, or both.

Spoilage bacteria like mesophiles and psychotrophs grow and break down the food, giving it an unpleasant taste, smell, and appearance.

Most people who eat food containing spoilage bacteria, or food like chicken broth that has gone bad, will have mild gastrointestinal distress within an hour or two, sometimes sooner.

The most common symptoms are stomach cramps as the body works to dispel the bad food, vomiting, and diarrhea to remove it from the system.

Many people’s symptoms go away soon after they’ve expelled the food.

It’s essential to drink water to avoid dehydration if vomiting and diarrhea occur, and if symptoms become severe, contact a healthcare professional. 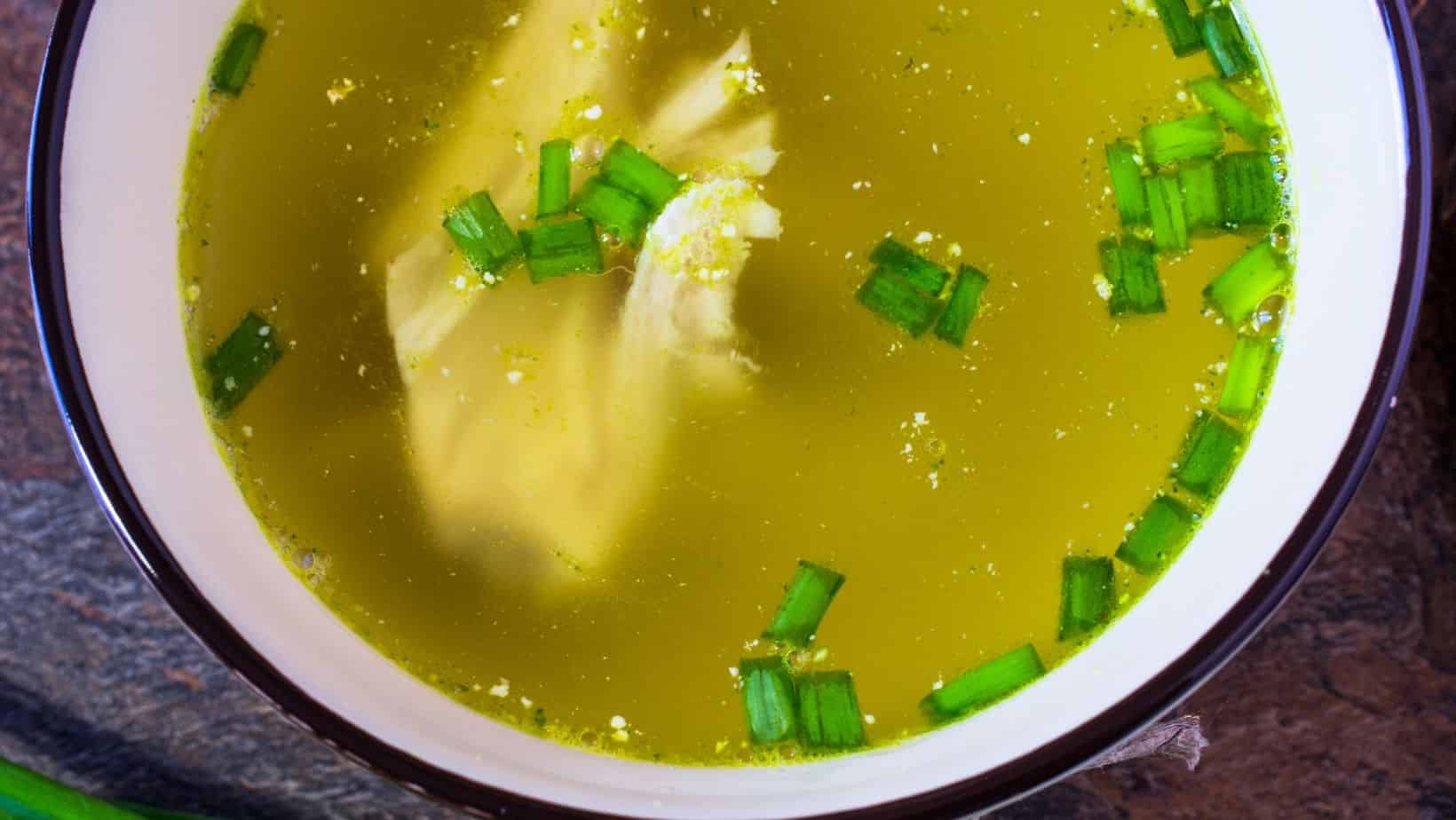 Foodborne illnesses caused by pathogenic bacteria like Clostridium botulinum, E. coli, and Salmonella are more dangerous. These bacteria grow in food held at a too-high temperature or food contaminated during food handling, packaging, or harvesting.

You won’t see signs of spoilage, so it’s important to use safe food-handling practices, including frequent hand-washing and avoiding cross-contamination between raw and cooked foods, especially meats.

Cross-contamination occurs when you use the same utensils or surfaces on raw meat and other foods. Unwashed hands can also transfer bacteria from raw to cooked foods.

Most food poisoning happens after consuming food contaminated with these pathogenic bacteria. Healthy people may only have fever, cramps, vomiting, and diarrhea in some cases, depending on the pathogen.

Symptoms of most foodborne illnesses appear within 30 minutes to 10 days, depending on the bacteria, and some illnesses like those caused by botulism or listeria can be fatal even in healthy people.

Fortunately, education about safe food handling means there’s only an average of 25 foodborne cases of botulism in the US each year. Throw out food unrefrigerated for two hours or more or food contaminated by raw meat to avoid becoming one of them.

Related:  What Kind of Cheese Does Chipotle Use?

Here are some of the most commonly asked questions people ask when they wonder, “What happens if you eat bad chicken broth?”

Do You Have To Use Chicken Broth Within 14 Days of Opening?

The broth will go bad long before 14 days have passed. Use chicken broth within 3-5 days of opening.

How To Store Chicken Broth?

Store it in the refrigerator in the smallest container possible with a tight lid or a tight layer of plastic wrap. The broth will last longer in an airtight container. 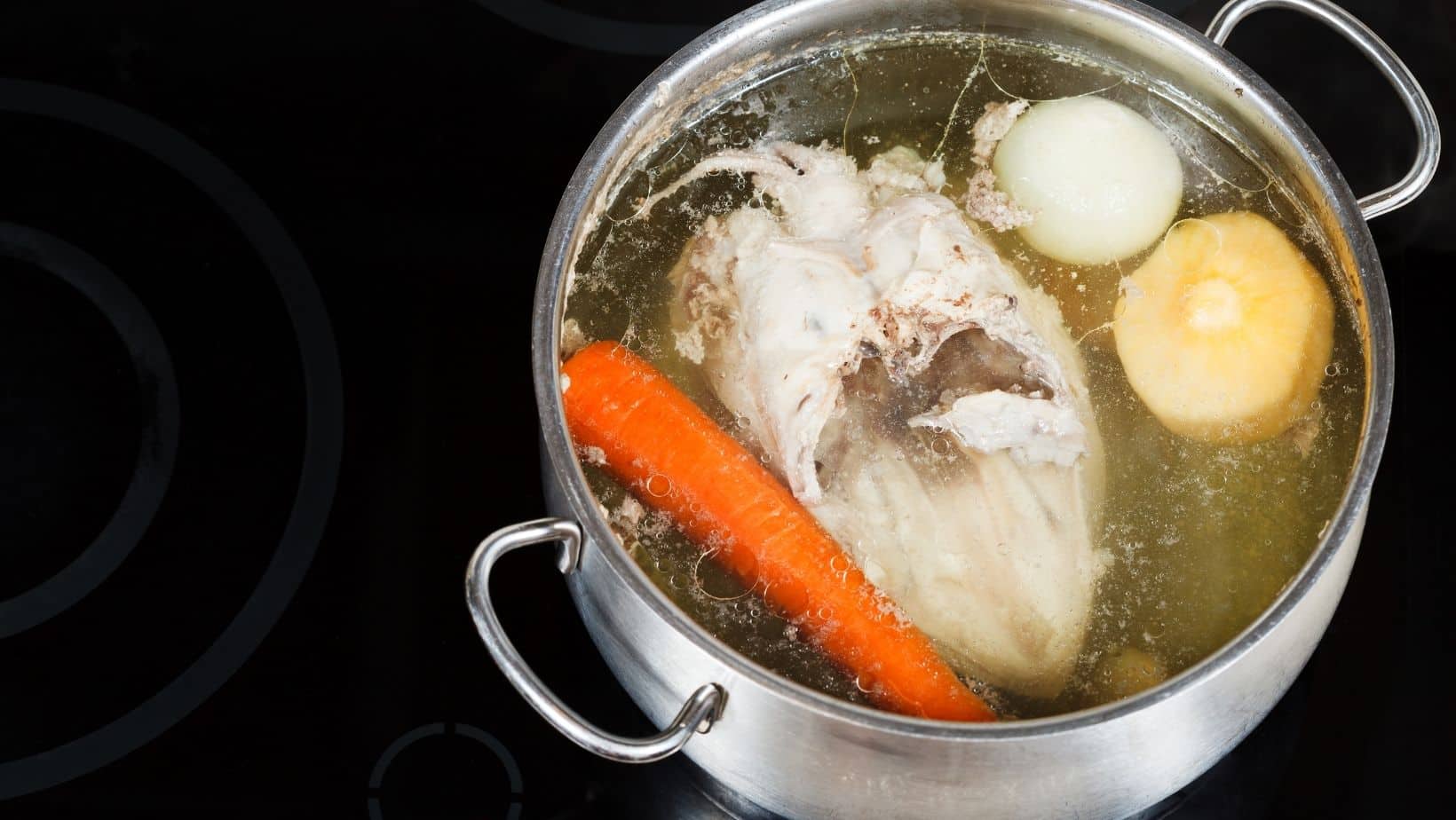 What Happens if You Eat Spoiled Chicken?

Can I Still Eat Rice Cooked in Chicken Stock That Was Left Out?

Don’t eat anything cooked with chicken broth left at room temperature for two hours or more. Pathogenic bacteria multiply rapidly in room-temperature food and can cause mild to severe food poisoning.

What Are the Best Ways To Store Chicken Broth?

Keep opened broth in the refrigerator in the smallest container possible to limit exposure to air. An airtight container or one with a tight-fitting lid is best. Alternately, you can store the broth in a similar container and freeze it for up to six months.

Can You Boil Homemade Chicken Broth To Extend Its Shelf Life?

No, don’t assume boiled chicken broth will stay good longer. Boiling kills most bacteria present in food, but not all of it. It also doesn’t kill the toxins created by bacteria, which can still make you sick. 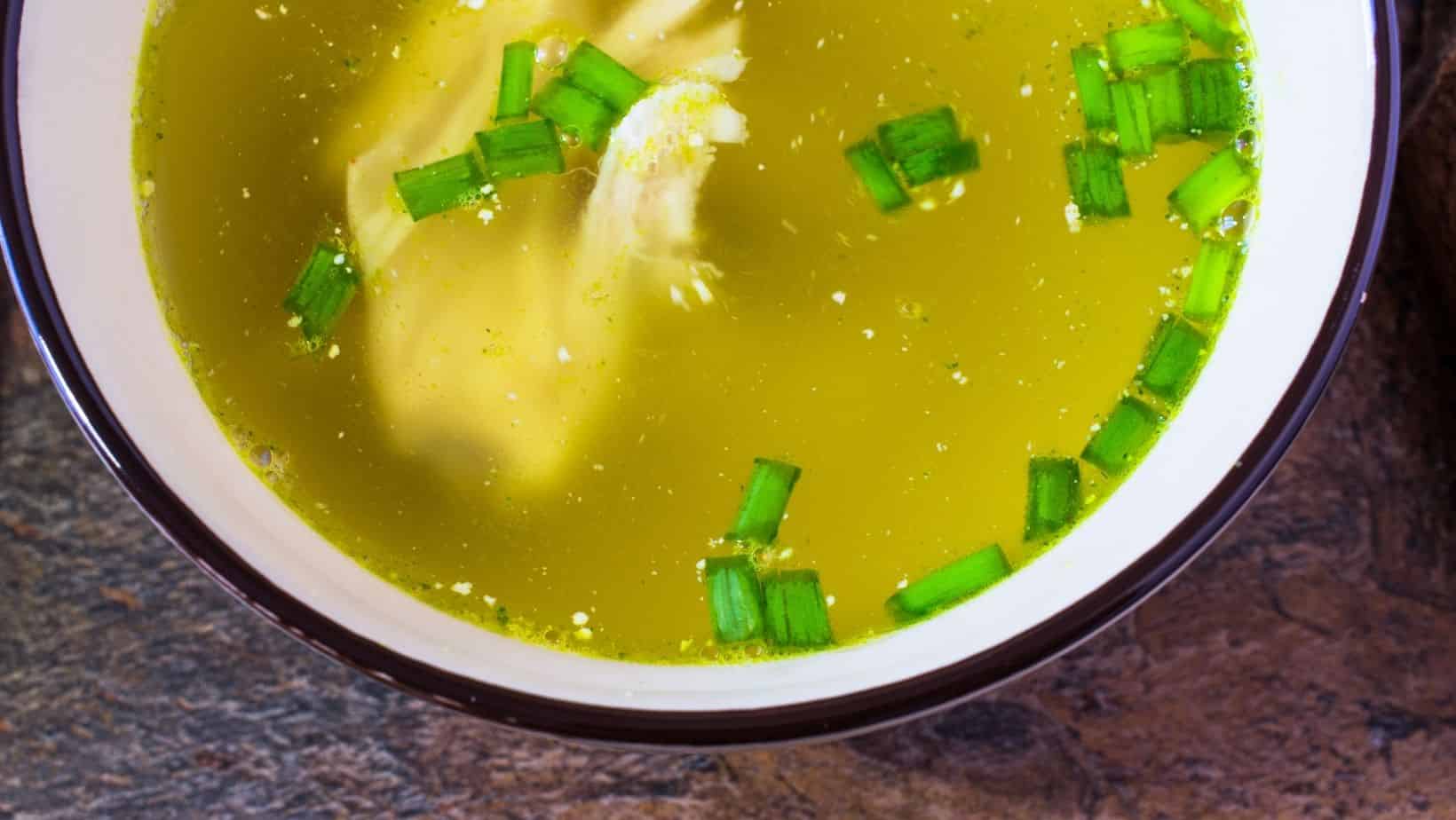 Wrap Up: What Happens if You Eat Bad Chicken Broth?

If you eat bad chicken broth, the most likely outcome will be stomach upset and an uncomfortable few hours to two days.

If pathogenic bacteria were present because of poor food handling practices or contamination, the illness can range from stomach upset and fever to life-threatening complications.

Throw out any questionable chicken broth to avoid the consequences of eating spoiled broth. Also, take care to handle food properly and avoid cross-contamination, and you shouldn’t have to suffer the symptoms of food poisoning.