Frozen pizza is one of the greatest inventions of the 20th Century. After all, it has made one of the best foods on Earth even easier to eat. However, if you don’t eat it all, can you eat the leftovers later? How long can frozen pizza be left out before it goes bad?

To safely consume leftover frozen pizza, it has to be stored properly. Ideally, by keeping it in the fridge in an airtight bag or container and preventing it from being exposed to room temperature for too long.

Because pizza is perishable, it will develop bacteria if it’s not stored safely or eaten immediately.

How Long Can Frozen Pizza be Left Out?

Frozen pizza is technically only safe for an hour or two after it’s been cooked. So toss out the cold slice from last night, unless you thought ahead and put it in the fridge in a Ziploc bag. This is because bacteria grow especially fast on meat, cheese, and other perishable foods (and as we know, pizza is often made with meat and cheese).

Even frozen pizza, which probably has more preservatives than we would like to admit, is susceptible to bacteria when it’s left out. Unfortunately, the preservatives used do not necessarily stop the cheese and pepperoni from being fresh food. Although it might not be as fresh as homemade or restaurant pizza, it has the same ingredients.

These ingredients—meat, cheese, tomato sauce, and bread—are all affected differently by bacteria. Bread is a little heartier and can be left out (although it will eventually mold).

Tomato sauce can last a while if it’s covered. However, the real risk is the fresh food: the cheese and the meat.

Cheese and meat are both animal products and tend to go bad more quickly than their baked or cooked counterparts. Indeed, cooked meat will rot quicker than other foodstuffs, so it’s vital to always keep it refrigerated.

Cheese and meat are technically considered fresh foods since they aren’t preserved and will not last as long on their own.

The “danger zone” for fresh food is from 40℉ to 140℉. It’s why fridges and freezers live below 40℉. Below this temperature, bacteria prone to feast on meat and cheese will not grow. Of course, we’re not going to keep meat at a temperature above 140℉ (as it would ultimately burn).

Related:  Can Muscle Milk Go Bad? (Get the details) 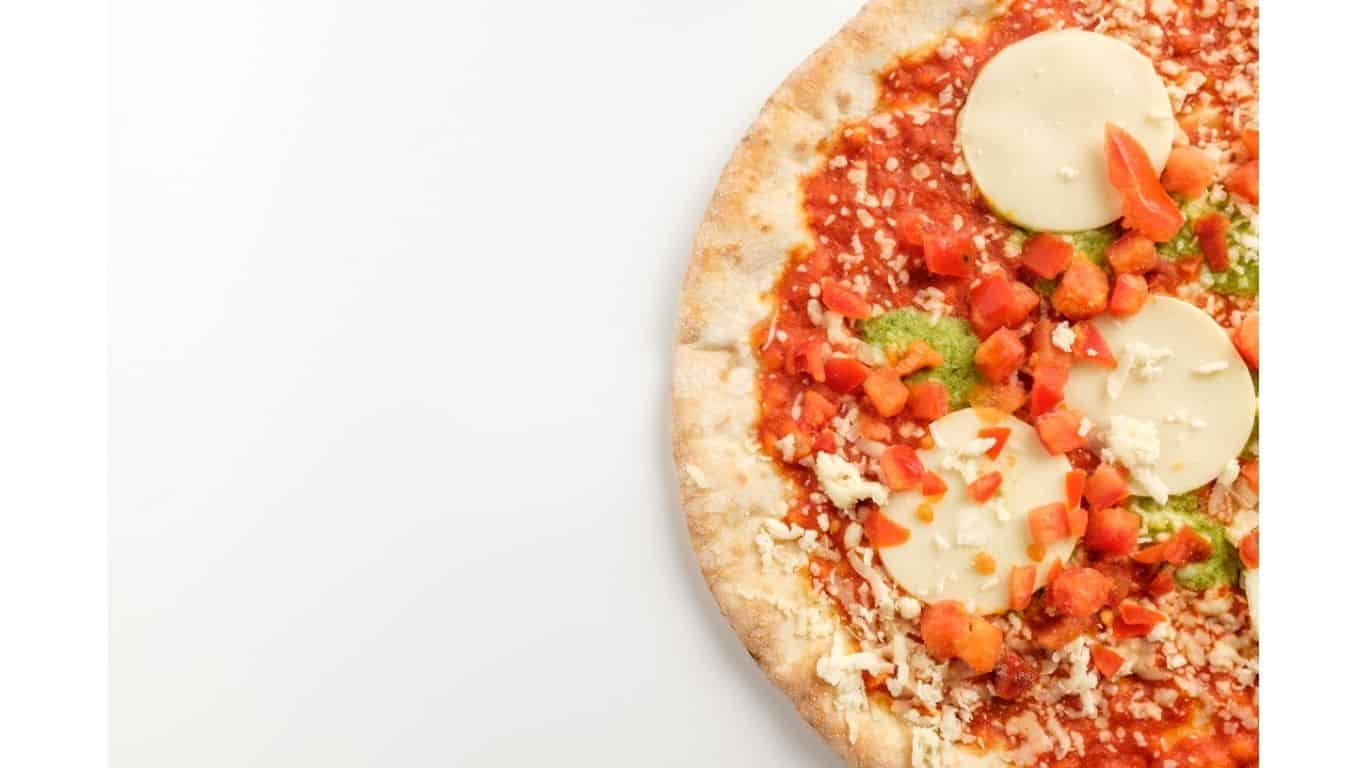 How to Properly Store Frozen Pizza

So you can’t leave frozen pizza out for more than two hours, or the bacteria will get to it. Does this mean you should throw all leftover pizza away? Or just risk it and get food poisoning? Well, for sure don’t do the second option. However, you also don’t have to throw away pizza just because you aren’t going to eat it right now.

If you want to keep your frozen pizza for later, store it in an airtight container or Ziploc bag in your refrigerator. You can also wrap it in foil, as long as the foil seals around the sides and there are no visible gaps.

You can’t just put the pizza in your refrigerator on a plate or the pizza pan. It will get hard and stale and become nearly impossible to eat. With an airtight container, Ziploc bag, or foil covering, the natural moisture will stay trapped within and help to keep the pizza from drying out while it’s cold.

What’s more, the cool temperatures of the refrigerator will protect the pizza from bacteria, mold, and mildew infections. Otherwise, it would take only a few hours for a frozen pizza to dry out and become stale if left on the counter.

How Long Does Frozen Pizza Last in the Refrigerator?

If properly stored, you can keep a cooked pizza in the refrigerator for several days. After three or four days, you might notice that the slices are stale or getting hard around the edges. This means that it’s time to throw it away and find new food.

Of course, even with the best storage, nothing lasts forever. That is especially true with food like frozen pizza, which is not supposed to last more than a meal or two once it’s out of the oven. If you make your pizza last several days, you’ve probably noticed a huge difference in tastes from day one to day three.

By the end of day three, a piece of frozen pizza in the fridge will be stale and hard, even after being heated in the microwave. It’s natural decomposition, as the pizza loses its moisture and becomes stiff.

After a few days, it’s time to get rid of the pizza. Even if it’s stored properly, it’s better to be safe than sorry. Besides, life is too short to eat stale pizza. Get a new frozen pizza out or pick something else for dinner tonight!

Are you still wondering about the safety of frozen pizza and how long can frozen pizza be left out? Here are some related questions and answers about cooking, storing, and eating frozen pizza.

How Do You Know When Pizza Is Bad?

As a general rule, it’s best to throw away pizza if it’s been sitting out for more than two hours. However, you might be wondering if there are other signs to tell you where your pizza is bad. Here are some things to look out for:

You can’t generally see bacteria at work, so you won’t see these signs after just two hours on the counter. If you see (or smell) any of the warning signs on this list, it is far too dangerous for you to eat the pizza. Throw it away immediately and check your surroundings for mold or mildew.

Bacteria won’t die in the temperature ranges below 40℉ or above 140℉. Instead, it sits in stasis, waiting for a safe temperature to grow. If you put a piece of pizza with the beginnings of mold on it in the freezer, it’s not going to kill the mold.

Instead, the mold will wait until you thaw the pizza and simply continue growing.

Can You Eat Frozen Pizza Once It’s Thawed?

If you were planning to make a frozen pizza and eat it but forgot to put it in the oven until long after it’s thawed, you might be asking yourself a few questions. Can you eat thawed frozen pizza, or should you pull a new frozen pizza out of the freezer and start again? Do you have to throw away an entire pizza?

The answer is that it depends on how long it’s been out. Always follow the directions on the package: some frozen pizzas require a little pre-thawing before you cook them. If this is the case, then you’re good to go with a thawed frozen pizza. You can stick it in the oven and enjoy it.

However, other pizza companies want you to put the pizza in the oven from the freezer, with little to no counter time. If you’ve forgotten about a pizza for a few hours, you might need to consider throwing it away. After all, two hours is enough time for bacteria to start growing, and you don’t want to eat that.

If you’ve left the pizza out for about an hour, you’re probably good to put it in the oven and eat it. The oven will kill off some bacteria and cook the pizza safely.

However, avoid cooking with ingredients that are already rotten as there’s no getting rid of that kind of bacteria.

Of course, if you put the frozen pizza in the fridge or somewhere under 40℉, you can safely eat it after it thaws. It might not cook as well if it’s been in the refrigerator for a while, but you will be able to put it in the oven without fear of bacteria overgrowth. 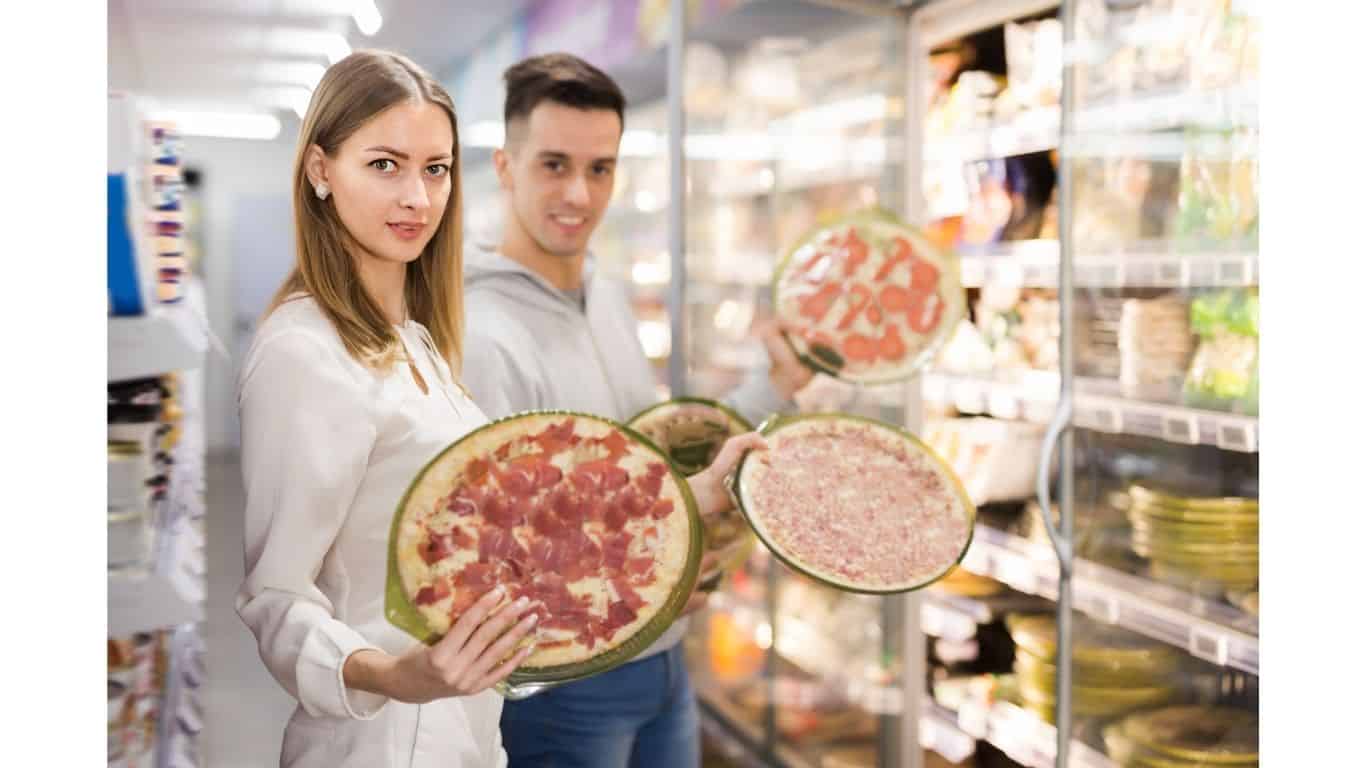 Can You Leave Frozen Pizza Out Overnight?

You might have guessed the answer to this question already: no. You shouldn’t leave frozen pizza out overnight, whether it’s cooked or uncooked. Bacteria starts growing in under two hours and will have a big head start if the frozen pizza is left out overnight.

If you accidentally left a few slices of leftover pizza on the counter, resist the temptation to eat them for breakfast. As delicious as cold pizza is on a lazy morning, it’s not worth a potential case of food-borne illnesses. Throw the old pizza away and make something fresh (perhaps a new frozen pizza!). 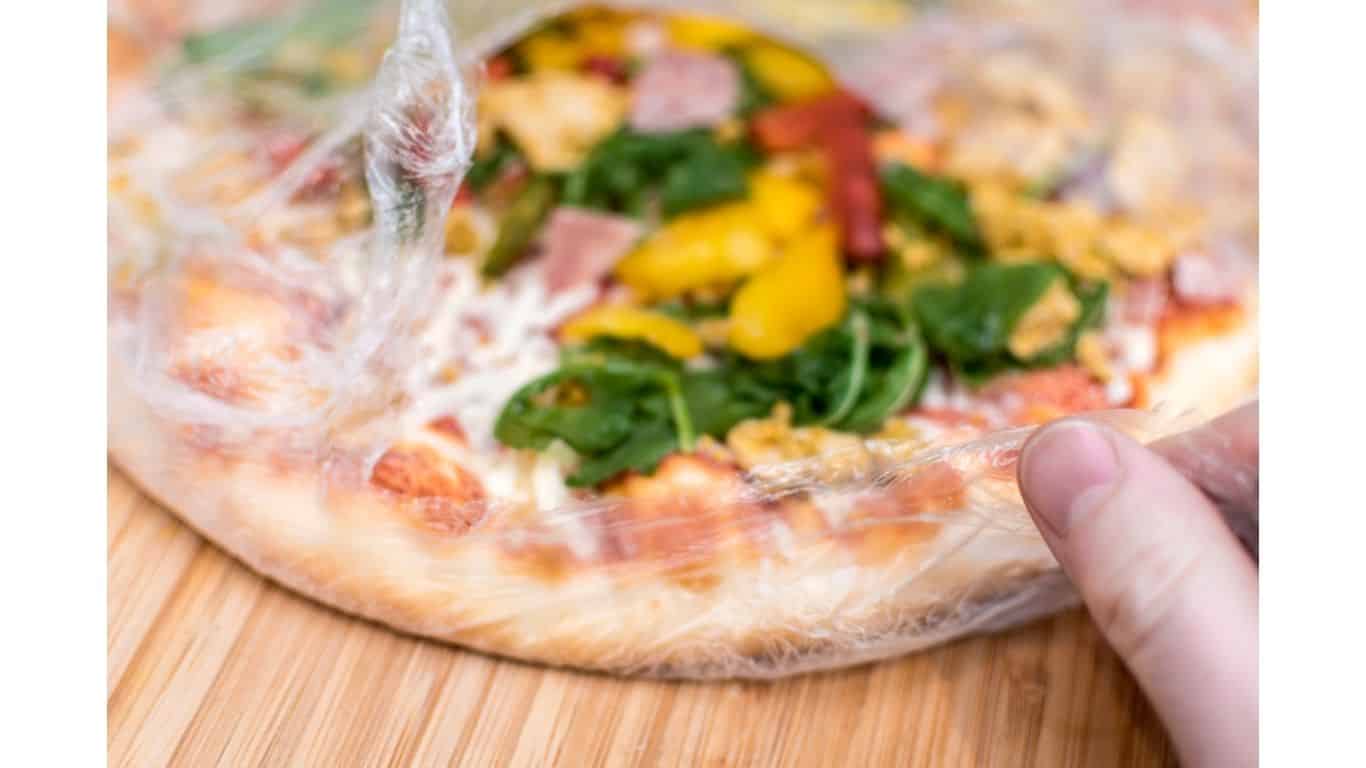 Can You Refreeze Frozen Pizza?

Frozen pizza is different from many other kinds of pizza because it has more preservatives. Because of this, you can bake it directly from the freezer. If you got a pizza out to bake it and decided to eat something else, is it okay to refreeze the pizza for another time?

Like several questions in this post, the answer depends on how long the pizza was sitting out. If you had the pizza on the counter for only a few minutes to an hour and a half, your pizza is safe to eat. It’s under the two-hour mark, and it’s safe to throw it back in the freezer for next time.

If you took it out of the original packaging, ensure that it is in an airtight container or bag.

However, if you left a frozen pizza on the counter for more than two hours before deciding not to bake it, you should throw it away. The bacteria won’t die in the freezer.

Instead, they will hibernate until it thaws again. Even if the freezer does manage to kill off any bacteria that has grown, it’s not something you know for sure (and is not worth the risk). 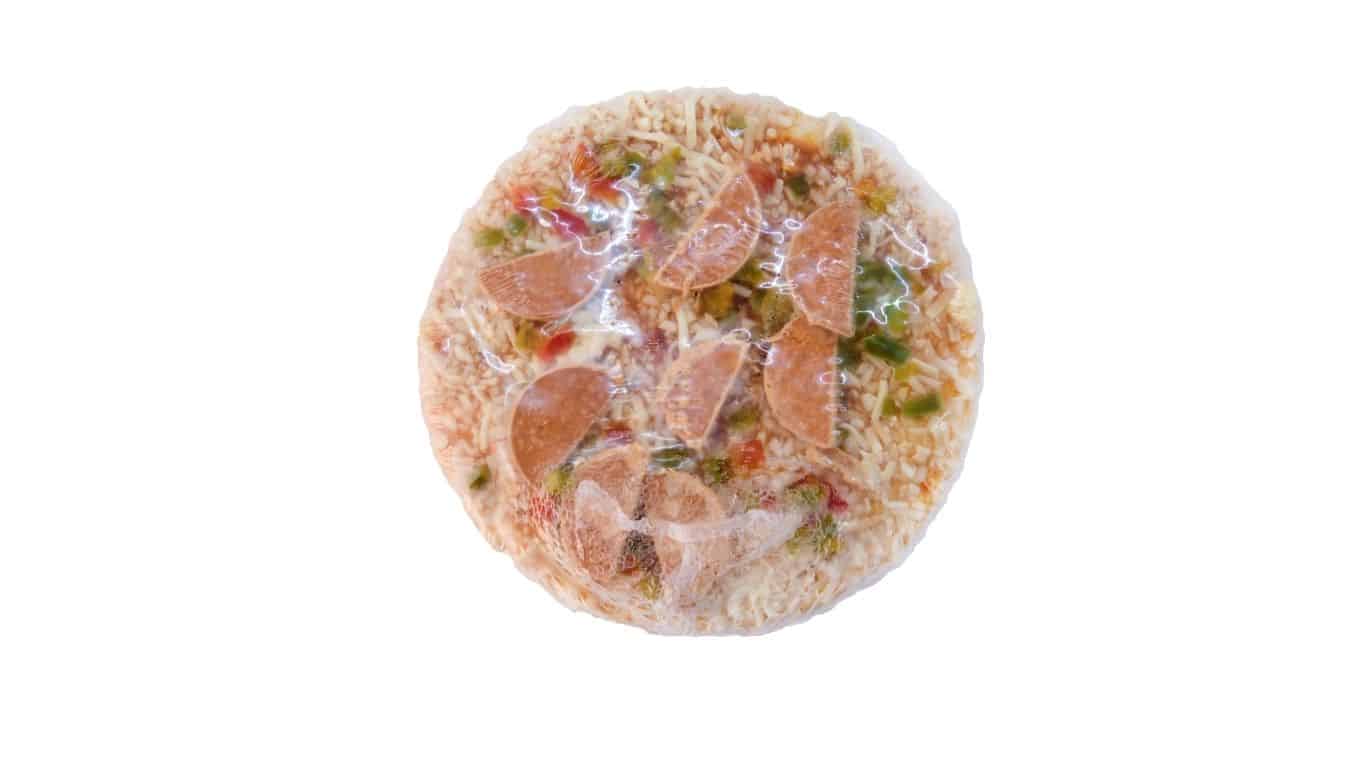 So, we’ve now answered the question, “how long can frozen pizza be left out?” Although you shouldn’t leave pizza out for more than two hours, you can enjoy it for several days if it’s stored properly. Keep it in an airtight container in the fridge, don’t leave it out on the counter, and you will be able to eat your frozen pizza for several days.

Enjoy your next pizza!